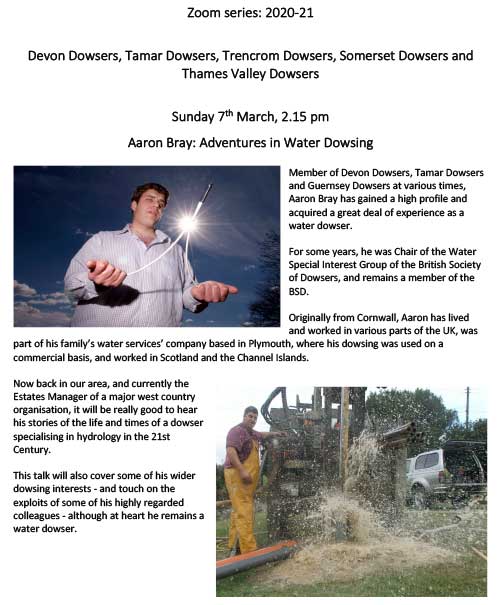 Member of Devon Dowsers, Tamar Dowsers and Guernsey Dowsers at various times, Aaron Bray has gained a high profile and acquired a great deal of experience as a water dowser.

For some years, he was Chair of the Water Special Interest Group of the British Society of Dowsers, and remains a member of the BSD.

Originally from Cornwall, Aaron has lived and worked in various parts of the UK, was part of his family’s water services’ company based in Plymouth, where his dowsing was used on a commercial basis, and worked in Scotland and the Channel Islands.

Now back in our area, and currently the Estates Manager of a major west country organisation, it will be really good to hear his stories of the life and times of a dowser specialising in hydrology in the 21st Century.

This talk will also cover some of his wider dowsing interests – and touch on the exploits of some of his highly regarded colleagues – although at heart he remains a water dowser.