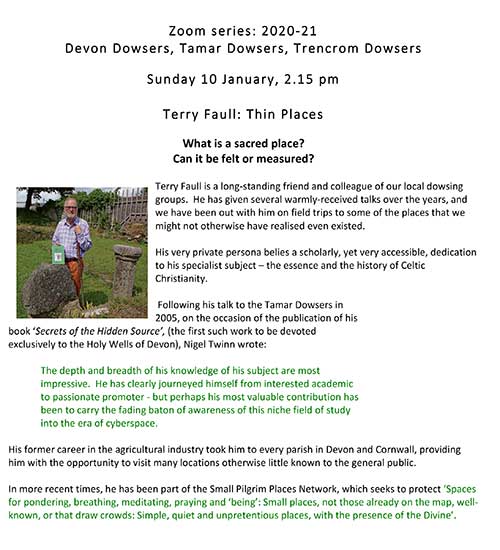 What is a sacred place? Can it be felt or measured?
Terry Faull is a long-standing friend and colleague of our local dowsing groups. He has given several warmly-received talks over the years, and we have been out with him on field trips to some of the places that we might not otherwise have realised even existed.
His very private persona belies a scholarly, yet very accessible, dedication to his specialist subject – the essence and the history of Celtic Christianity.
Following his talk to the Tamar Dowsers in 2005, on the occasion of the publication of his
book ‘Secrets of the Hidden Source’, (the first such work to be devoted exclusively to the Holy Wells of Devon), Nigel Twinn wrote:
The depth and breadth of his knowledge of his subject are most impressive. He has clearly journeyed himself from interested academic to passionate promoter – but perhaps his most valuable contribution has been to carry the fading baton of awareness of this niche field of study into the era of cyberspace.
His former career in the agricultural industry took him to every parish in Devon and Cornwall, providing him with the opportunity to visit many locations otherwise little known to the general public.
In more recent times, he has been part of the Small Pilgrim Places Network, which seeks to protect ‘Spaces for pondering, breathing, meditating, praying and ‘being’: Small places, not those already on the map, well- known, or that draw crowds: Simple, quiet and unpretentious places, with the presence of the Divine’.