Sadly, due to Coronavirus, our normal events have had to be cancelled. However, the GOOD NEWS is that – with Devon Dowsers and Tamar Dowsers – we now have monthly Zoom presentations featuring well-known dowsers.

Our venue for inside events is Marazion Community Centre (TR17 0HW), in Gwallon Lane, Marazion. Gwallon Lane is opposite the Fire Engine Inn (on the coastal side of the main street in the Marazion to Helston direction) and there is a signpost for the surgery, which is next door to the hall. Plenty of free parking.

Unless otherwise stated, talks/presentations normally start at 2pm on Saturdays, with tea and biscuits and discussions plus question and answer sessions at the end of the afternoon.

If you are attending an outside event organised by Trencrom Dowsers, you are deeming yourself fit to cope with the physical activity. Field trips may at times involve substantial distances on uneven and slippery ground. Please wear appropriate footwear and clothing.

PLEASE NOTE: The areas that we love to visit are also loved by ticks! Cornwall Wildlife Trust has advised us to be aware of this. There is plenty of helpful information here.

For further details of events please contact Jill Moss on 01736 740093 or email: mossinthewoods@btopenworld.com 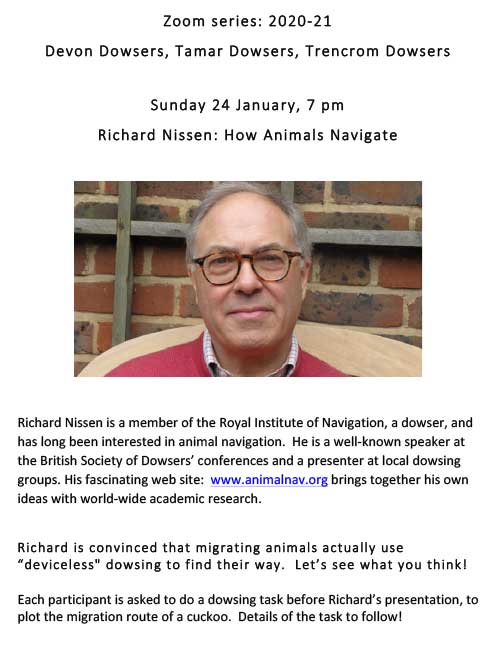 Richard Nissen is a member of the Royal Institute of Navigation, a dowser, and has long been interested in animal navigation. He is a well-known speaker at the British Society of Dowsers’ conferences and a presenter at local dowsing groups. His fascinating web site: www.animalnav.org brings together his own ideas with world-wide academic research.
Richard is convinced that migrating animals actually use “deviceless” dowsing to find their way. Let’s see what you think!
Each participant is asked to do a dowsing task before Richard’s presentation, to plot the migration route of a cuckoo. Details of the task to follow! 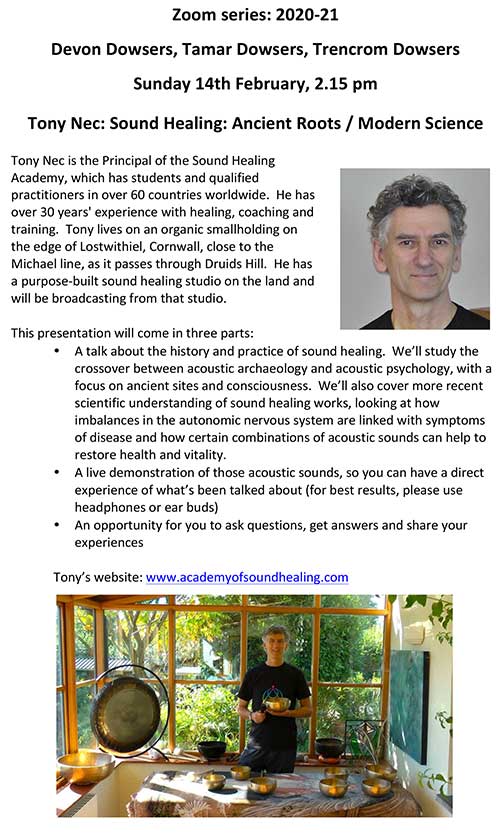 Tony Nec is the Principal of the Sound Healing Academy, which has students and qualified practitioners in over 60 countries worldwide. He has over 30 years’ experience with healing, coaching and training. Tony lives on an organic smallholding on the edge of Lostwithiel, Cornwall, close to the Michael line, as it passes through Druids Hill. He has a purpose-built sound healing studio on the land and will be broadcasting from that studio.

This presentation will come in three parts: 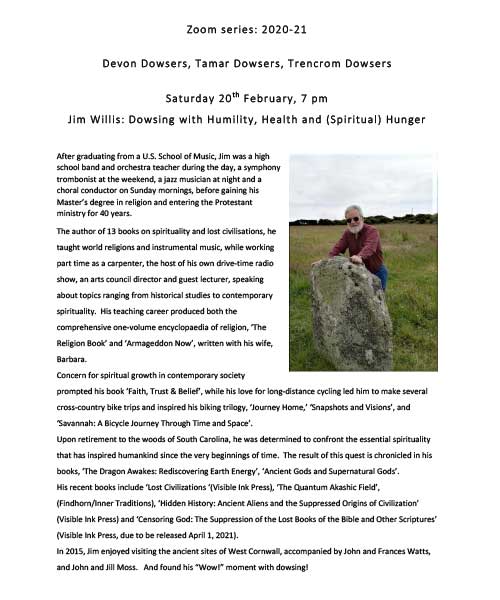 After graduating from a U.S. School of Music, Jim was a high school band and orchestra teacher during the day, a symphony trombonist at the weekend, a jazz musician at night and a choral conductor on Sunday mornings, before gaining his Master’s degree in religion and entering the Protestant ministry for 40 years.
The author of 13 books on spirituality and lost civilisations, he taught world religions and instrumental music, while working part time as a carpenter, the host of his own drive-time radio show, an arts council director and guest lecturer, speaking about topics ranging from historical studies to contemporary spirituality. His teaching career produced both the comprehensive one-volume encyclopaedia of religion, ‘The Religion Book’ and ‘Armageddon Now’, written with his wife, Barbara.
Concern for spiritual growth in contemporary society
prompted his book ‘Faith, Trust & Belief’, while his love for long-distance cycling led him to make several cross-country bike trips and inspired his biking trilogy, ‘Journey Home,’ ‘Snapshots and Visions’, and ‘Savannah: A Bicycle Journey Through Time and Space’.
Upon retirement to the woods of South Carolina, he was determined to confront the essential spirituality that has inspired humankind since the very beginnings of time. The result of this quest is chronicled in his books, ‘The Dragon Awakes: Rediscovering Earth Energy’, ‘Ancient Gods and Supernatural Gods’.
His recent books include ‘Lost Civilizations ‘(Visible Ink Press), ‘The Quantum Akashic Field’, (Findhorn/Inner Traditions), ‘Hidden History: Ancient Aliens and the Suppressed Origins of Civilization’ (Visible Ink Press) and ‘Censoring God: The Suppression of the Lost Books of the Bible and Other Scriptures’ (Visible Ink Press, due to be released April 1, 2021).
In 2015, Jim enjoyed visiting the ancient sites of West Cornwall, accompanied by John and Frances Watts, and John and Jill Moss. And found his “Wow!” moment with dowsing!

Over the course of the last hundred years, physicists have discovered a counter-intuitive, intensely complex yet discernible landscape called Quantum Reality. Little did they realize they had uncovered, through sophisticated mathematics, a field that has been explored by visionaries for thousands of years. Entrance to this arena is afforded anyone who incorporates dowsing into their lifestyle. But reality outside our normal perception realm is not to be entered lightly. To explore an area from which our five senses have evolved to ward us off requires a degree of humility. “Here there be dragons!” as the old maps used to say about unknown spaces. It also takes a healthy level of emotional balance and stability. Most of all, we need to demonstrate the desire, the spiritual hunger, to explore such realms. This is our birth right. It’s why we were born. It reveals the purpose of human life.
In this presentation, we will seek to understand how to prepare for the exploration of this reality.

Healing with Feng Shui and Geomancy

Title to be confirmed

Near Chûn, this is a courtyard settlement, second only to Chysauster despite not being excavated. Details to follow.

A one-day workshop. Friendly, informal and fun but an excellent grounding in basic dowsing. Limited to a small group.

Something different!   We’ve been thinking about dowsing the Plen, an ancient “Playing Place” in the centre of St Just, for several years.  And not just because it’s close to the “Dog and Rabbit” for cakey tea!   Details to follow.

Don, a guide at Stonehenge and Chair of Hampshire Archaeology Dowsers will be coming down to give us a talk today. He will explain how archaeological dowsing on a wide range of sites can be backed up by either geophysical survey and/or excavation. This process is slowly being recognised by archaeological experts, especially when reports are completed on our work. Several examples of such work will be included in this presentation.

This impressive Iron Age cliff fort is between Porthcurno and Penberth and is well worth a visit. Details to follow.

On the moorland north of Lanyon Quoit, the chamber is directly aligned to midwinter sunrise. The settlement consisted of ten round houses. Details to follow.